Your browser does not support the Unity Web Player. Want to save the game for later? Add it to a collection.

Welcome to "A Logical Dive", a game made for the Cyberpunk Gamejam 2014.

Help Tyrell and Pops dive into an architectural maze and hack security cameras and computers. Find the best routes, beat your times and get to the end of a thrilling story!

I realize the Hacking Terminal may not be as clear as I intended so let me explain it better. 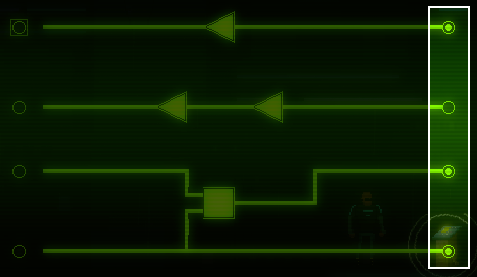 Now on the left, the four Entry points is what you have control on. You can set each entry point ON or OFF. In the example of the tutorial, let's see the first two Entry points.

As you can see on the reminder, the triangle is a NOT door, that means the output is the contrary of its input. That means that 1st and 2nd entry point must be OFF so that the first exit point is ON and the second is OFF (two consecutive NOT doors generate the same output as the input). So we don't change anything!

Here are the 3rd and 4th exit points:

So here's how the solution looks. 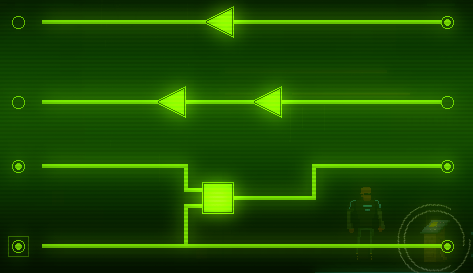 Now remember, triangle is a NOT door, square is a AND door, circle is a OR door and diamond is a XOR door. An other useful tip: it's always better to try to deduce the inputs of a door given its output.

The three difficulty levels only affects the Hacking Terminal:

The game resolution is 960x540 but you can also play it Fullscreen by right clicking on the game and selecting "Go Fullscreen" (exit by pressing Escape).

If you're facing low frame rate, try turning off the Blur and/or Fog effect in the Options.

I hope you enjoy playing "A Logical Dive" and you'll get to the end of the story. Although I've tested it quite thoroughly, there may remain some small bugs. If you encounter any problem, please tell me!

And if you have any question or comment, don't hesitate: @oddlyshapedpxls

You can also visit my blog (a bit empty, I concede): Oddly Shaped Pixels' blog 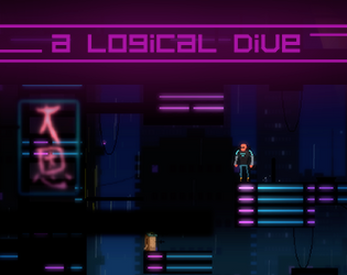