Your browser does not support the Unity Web Player. Want to save the game for later? Add it to a collection.

Help Altzio kill as many targets as possible in this small Assassin's Creed demake made for the Mini Ludum Dare #50.

Have a look here if you want to see how to achieve it : Gold Trophy Run

If you enjoy the game, don't hesitate to click the "Support" button and leave a coin, it's always welcome and it will motivate me to make more fun games!

- <Z> : Interact with people (kill them, mostly) when flashing white

- <A> : Interact with building/hay chariot/tower when flashing white + Jump from top of building

You play as Altzio, a not so famous assassin from Damascus hired to eliminate a quite consequent amount of targets.

You have 10 seconds to eliminate your first target and then:

- killing a target will give you an extra 5 seconds

To kill a citizen, just stand in front of or behind him and wait for him to flash white then press <Z>.

Dead citizen will (or not) give you a small amount that may come in handy to bribe a guard or two!

The guards in Damascus can be in one of these 3 states:

- RELAX: it's their default state, they will patrol in the city until they see a dead body on the floor

- ON ALERT: if a guard sees a dead body, he'll immediately start looking for Altzio in the whole level

- ON HUNT: if a guard on alert sees Altzio, he'll turn "on hunt" and chase him until he can capture him. To escape a guard on hunt, you can:

You can only kill guards on "Relax" or "Alert" state and only from behind, unless you use the Hayssassinate ability, in which case the orientation doesn't matter.

A citizen dead body will disappear after 15 seconds.

A guard dead body will disappear after 40 seconds (metal plates are less biodegradable).

For each 5 targets eliminated, Altzio will gain a new special ability:

- 5 targets get you "Blend in" : stay still for one second and you'll go invisible to the guards (same effect as jumping into a hay chariot)

- 10 targets get you "Hayssassinate": when hiding inside a hay chariot, you can kill any close enough character without leaving a body by pressing <Z> (you can't kill a guard on hunt though)

- 15 targets get you "Towerjump": you can climb on a tower by pressing repeatedly on <A> when standing near it. On top of a tower, you'll be able to designate a new target for each 2 seconds spent. Press <A> to jump from the tower top into a hay chariot. If when climbing you decide not to get to the top, press <A> with the <Left arrow> or <Right arrow> to immediately fall down

I hope you enjoy this small game, it may seem a bit hard at the beginning but you'll rapidly improve, no doubt!

If you have any comment about this game, you can do it here.

Any question you have, you can email me, contact me on Twitter or just visit my my blog. 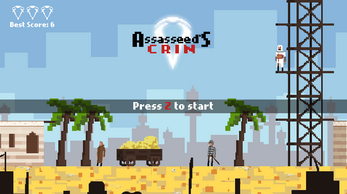